Why is Jill Feldman so well suited to the songs of Charles Ives as none I have yet heard? Is it because she is a red blooded American soprano? No. She is better known in Europe, where I heard her first. She is California, not Connecticut. Is it because her career is in art songs and in modernist modalities? No. She is a singer of von Bingen, Charpentier and those anonymous Troubadours of the ancient tradition.

It seems to me that Ms. Feldman knows what Ives was trying to do and where he was trying to go, in a sort of answer to Lenny Bernstein’s Norton Lectures posing of Ives’ unanswered question. And she knows it because she has sung the tradition that, in the midst of his systematic experimental work with several forms of modernism, Charles Ives was connecting with.

Ives grew up with far more physically present music at every turn than we have now, especially in comparison, because most of our media is just constant downpour of mere representations. He was standing with performed music at every Sunday church service, at every afternoon or evening at the park’s gazebo or bandstand. Music of his father’s sort marched up and down Charles’ boulevards at every holiday. The songs are the key to all of Ives music. Songs are his headwaters and his delta both.

And Ives wanted to go in both temporal directions at once. In this recording we go back to where all these forms he knew came from: arching back over the ocean; forward to hear what new fruit would come from grafting experimental form onto established stock. So there are his immediate and ambient connections to church, bands and marches. At the same moment, he has ambitions to polytonality and polyrhythm, with their roots in Biber (just listen to his Battaglia 10 if you want genius wacky).

Listen to “At the River”. If you feel a wrong turn in this old song, it is because Ives has invoked an element of indeterminacy, as new as quantum mechanics, but as old as Ockeghem. Ms. Feldman makes it work; she is in control, not only of her voice, but of the intent. When you listen to so many others, they are out of control. They loose control to the tonality they imagine is either thrust upon them or is what they imagine Ives was looking for. They are almost always off the mark to the point of vocal reaching, near screeching or a careering and bending that, careens off to some disorienting orbit.

Ms. Feldman traverses these slightly strange strands easily and without strain. She has informed and thereby supreme control. Listen how easily she moves to another form and another effect in his “Slow March”. She evokes Handel (a frequent appearance in her ample discograpghy) as Ives intended. I must mention the piano sets a spot on cadence, and is excellent in general. Ives knows from marches.

In Memories, she lithely turns comic. Gilbert and Sullivan would surely nod at her smack and patter. Yet without any blush, she can belt a ballad as any of the sentimental sort of the gay `90’s, with none of that woozy tremulousness of the overdone. Her “Sick Eagle” shows her firm control where most others fail. They throw at you a drunken, teetering eagle. She knows Ives’ means sickness as a metaphor, not a goal. Ms. Feldman brings across an expression of spiritual sickness without inducing nausea. She gets Ives’ idea of the American Indians right – mournful, not lethargic.

Again, other singers are controlled by the tonality. So Ives becomes exaggerated, overworked and leaden in their hands. Ms. Feldman keeps the base musicality, never losing her balance. She bends her notes but the break you feel impending never happens. She brings you home as safely as Ives intended.

In “Songs My Mother Taught Me” (An Old Song Deranged, as Ives quipped) we see not all were American. This is Czech in origin, but already translated in Ives day. Listen to this same one as done by Dvorak in his Gypsy Melodies, i.e., Ciganske Melodie Op. 55 #4. Heyduk is the poet. Similarly, “My Native Land” is not American, yet Ives made it his own.

Ms. Feldman set us a new standard in clarity, in conveyance and in understanding. I hope for at least one more volume.

The good thing about this album starts with the label itself. How beautiful that a record company is called Olive Music. It was the idea of Kees Boeke, flutist and husband of the soprano Jill Feldman. They tell me that the couple lives on a farm in Tuscany with olive groves, hence the name; full tribute to the emblematic fruit of the Mediterranean culture-and diet. Their catalog was, until now, entirely devoted to so called early music but with this new release it takes a leap in time and style to offer a collection of the songs of Charles Ives, the eccentric American genius who does not end to surprise those who approach him.This is because his one hundred and fourteen songs, published at his own expense in 1500 copies edition in 1922 – are of double interest: by the vicissitudes of his idiosyncrasies as creator-the thirty-five songs gathered here range from 1888 to 1924 – and by the different authors of the texts, starting with himself and his wife, Harmony Twitchell, and followed by Milton, Matthew Arnold, Lenau, Rossetti and St. Bernard himself. Being part of the Romantic tradition, for he loved Brahms, he intended all the poetry to have a direct relationship with the music which it serves – and vice versa, to be exact. There is a continuing desire to achieve a climate, a particular atmosphere in the miniature of each song, naturally- for we speak of Ives- based on a freedom of approaches and procedures that give these songs that unique personality and make them exciting like few others. In the songs there is Ives the progressive, as in the Concord Sonata or similar works, largely because they reflect his world in the same way, i.e. with the exciting mix of complexity and tradition. Jill Feldman, who sings them admirably with pianist Jeanette Koekkoek, says herself that these songs lead her to freedom, to memories of childhood. She talks about how important it is for her to not only to sing in English, but to do it with an American accent. And this music is also that: deeply American. And is as great as it is universal. 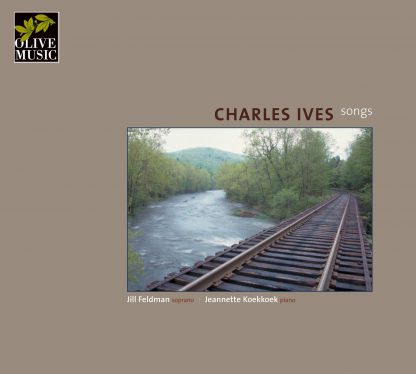