This is an obvious followup to Tetraktys’ Chantilly Codex trilogy, although Matteo’s music comes from the Modena MS, where it’s by far the largest single contribution to what is otherwise a manuscript of many more Ars Subtilior songs. The liner notes, mostly by Kees Boeke, are rather technical, discussing the music & text of each of the pieces in turn, including some comparisons to other pieces in the repertory. Matteo’s music thus comes off as less improvisatory than that of some contemporaries, for which arguments have long been made that they may be subsequently notated improvisations, and much more carefully prepared as regards both consonance & text — the latter something that Matteo apparently tended to write for himself.

The musical result is distinctive & sophisticated, with a variety of allusions (as is typical of the style). Boeke also discusses instrumental factors including text underlay, and intervallic structures in some lines. This sort of analysis provides a welcome antidote to what has sometimes become a dogmatic intent to perform everything from this era on voices alone — not that that style hasn’t had its own triumphs. Boeke & Tetraktys are in excellent positions to interpret Matteo’s music, not only because of their previous series — and note that Tetraktys continues to evolve as an ensemble, with a previously unknown soprano (Stefanie True, who is wonderfully idiomatic, and very much in keeping with the traditional sound of the ensemble) fronting this new album — but because of various previous endeavors.

Following some modest early attention (including as early as the 1930s), then a more-intriguing-than-satisfying full program LP by the Medieval Ensemble of London, the Huelgas Ensemble (as so often, in this & other repertory) produced a coherent anthology in 1998, and this was followed quickly by a Mala Punica release in 2000, on which Boeke is a prominent participant. Whereas the Huelgas album includes mass movements & an independent motet, it does illustrate 5 songs, including 2 in common with this new production. Mala Punica recorded an entire program of secular songs, also with 2 in common (which suggests the breadth of Matteo’s output), although particularly by the “Erato era” of their recording career, Memelsdorff et al.’s style came off as far too orchestrated & busy for me — basically baroque. Here, and via the Chantilly series & otherwise, Boeke brings the technical facility gained in that project into a more idiomatically medieval conception, though. So it was added to my personal list. Whereas I won’t claim that it blows the Huelgas interpretation away on all points, it’s revelatory for its sense of detail & just how clearly it articulates Matteo’s intricate formal counterpoint. It really answers any lingering doubts as to the quality of the music.

The number of people whose hearts go pitter-patter at the thought of a collection of music by Matteo da Perugia ought rightly to be legion, but is in fact probably somewhat closer to minuscule. This is just one of the numerous hardships which we must bear on behalf of our beleaguered times. I remember well the first time I heard one of his pieces, at a concert by the Huelgas Ensemble in Toronto; the music was so exquisite, so expressive and beguiling, that an audible gasp escaped the audience when the final note was sung, as though we’d all been holding our breath. Matteo was writing around the year 1400 and was a practitioner of what was then, and is still now, called the ars subtilior style — the subtle art — which is one of the most delightful of the medieval artistic byways awaiting discovery by listeners whose wanderlust leads them off well-beaten trails. His compositions belong to the courtly love tradition, being primarily settings of secular love poetry. Despite his name, he worked in and around the Duomo in Milan, and all of the music we have from him survives in a single manuscript.

His music pops up now and again on early music recordings, but this is, to my knowledge, just the third recording devoted entirely to him, the earlier two being by the Huelgas Ensemble and Mala Punica, both of them superb interpreters. But Tetraktys have nothing to fear from the comparison. They have chosen to perform these pieces as vocal solos with instrumental accompaniment — not a mandatory choice, if comparisons with the other recordings are anything to go on — and much of the appeal of this recording lies in the singing of Stefanie True, a Canadian soprano who is otherwise unknown to me, but who earns high praise for the beautiful purity of her voice. Instrumental accompaniment from a trio of musicians includes medieval fiddles, harp, and organetto. The result is one of the more alluring and gorgeous discs of early music I’ve heard in a long while. 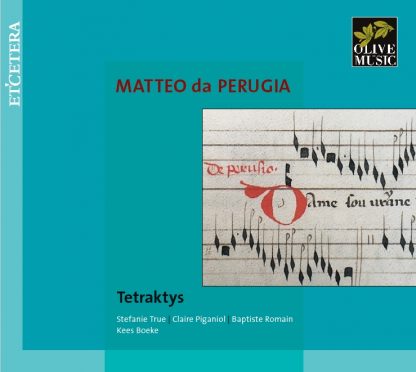