The title of this disc refers to a book by the English gambist Christopher Simpson which appeared in 1659 and was reprinted in a revised version in 1665. Its full title reveal what is about: The Division-Violist, or An Introduction to the Playing upon a Ground. “Playing upon a ground” means that an instrument, in Simpson’s case the viola da gamba, plays a melody with variations over a bass pattern which is continuously repeated. This kind of music was very popular in England in the 17th century, and it was in particular played on the so-called division viol. This is described in New Grove as an “English form of bass viola da gamba, smaller in size than a consort bass Viol but larger than a Lyra viol. (…) Since its compass was large (a good performer could use more than three octaves) it was not limited in its divisions to any one line of a polyphonic vocal composition, but could encompass them all”.

The name mostly associated with the genre of divisions on a ground is the said Simpson. Some time ago I reviewed a disc of the Lachrimae Consort, largely devoted to his divisions. So far little attention has been paid to Henry Butler, whose compositions in this genre are likely of an earlier date than Simpson’s. It is impossible to put a date to the 20 compositions from his pen which have survived, but according to Roberto Gini in his liner-notes it is very likely that at least the preludes and divisions for viola da gamba and bc are from his earliest years in England. In 1623 he left his native country for Spain where he entered the service of King Philip IV. He remained there until his death in 1652. It is not known when he was born, but it seems that it must have been in the last decade of the 16th century. Nothing is known about his education or his formative years either.

He soon must have made quite a name for himself. Simpson mentioned him in his book and the French writer Jean Rousseau dedicated a section in his book Traité de la Viole to Butler. The Italian composer Andrea Falconieri dedicated one of his compositions to him. This bears witness to his great reputation. This is easy to understand if one listens to this disc. It includes ten of the 13 divisions and the two preludes plus one of his sonatas. Butler also wrote three sonatas for violin, viola da gamba and bc which seem to have been written during his time in Spain. It is quite possible that he has written more music for his own instrument at that time, but Gini mentions the fire in the royal palace in Madrid in 1734 which has destroyed a large part of the music library.

“While in Forquerai [sic], Marin Marais and many other composer-violists, the technique and its specific difficulties are generally idiomatic of the instrument itself, in Butler one finds sudden and unprepared changes in position that we generally find in cello literature of the second half of the XVIII century and onward (Duport). Moreover there are leaps of octaves played in double stops and even chords, which exploit impervious sections of the fret-board in order either to produce unusual and seducing sonorities or a continuous counterpoint in multiple voices.” He adds: “For the first quarter of the 1600’s the singularities of Butler’s style appear to be ahead of its epoch: His original way of employing the technical possibilities of the viol, the expressivity and the novelty of his inventions place him about half a century before his contemporaries. Butler’s music sounds incredibly modern for the time that it was most likely written.”

Roberto Gini plays this repertoire brilliantly. His tone is bright and colourful, he explores the dynamic possibilities of his instrument to the full and the interpretation is expressive and incisive. The variety in the scoring of the basso continuo section contributes to the attraction of this disc. The use of the harp is especially noteworthy, as it brings a different colour to the bass part.

This is a quite fascinating disc and a worthy monument for a great player and composer. 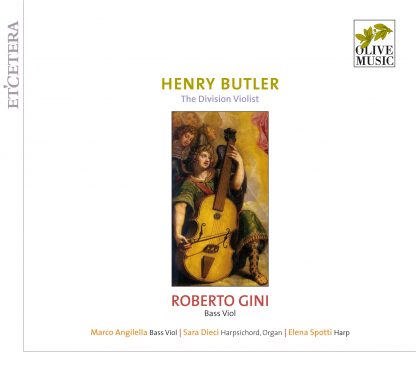