A personal note by the producer

In the distant 1969 two recordings in the famous series of “Das Alte Werk” drew my attention to the composer Carlo Farina, one of the many forgotten composers at that momentous period to be rediscovered by the legendary groups Concentus Musicus and Alarius Ensemble.
One of the pieces was the now famous Capriccio Stravagante, the other the Trio sonata “La Moretta”, a sonata in one single, thirteen minute long movement. Both compositions struck me by their audacious language, techniques and dimensions and some other disturbing quality that was hard to define.
Five years later I decided to quench my curiosity and went to the Landesbibliothek in Kassel, where the only surviving copies of his five books of instrumental music remain. The photocopies arrived at home and I noticed that all five books had a similar structure, starting with a set of Pavanas followed by faster dances and then the Sonatas, Trio sonatas and a few other miscellaneous works. Another remarkable feature of these five books was that they were all published in the course of barely two years and that the composer at that time was anywhere between 25 and 30 years old. It is therefore unlikely that he had accumulated all these compositions during a long period of his life before, since he was still very young and the music as such belongs to a German tradition of stately dance music, established notably by Scheidt and Schein . They therefore certainly were composed during Farina’s stay in Dresden between 1625 and 1628. And at the same time this seems to be his entire output as a composer, all written in a kind of fury in the course of 2 or 3 years!
I felt that this music told a story and ever since have waited for an occasion to bring it to the surface. In the early 90’s we did some performances of some of the Pavanas with a mixed ensemble which convinced me even more of the extraordinary qualities of this music and at the same time made me realize that the title page’s indication “auff violen anmutig zu gebrauchen” had to be taken seriously. It had to wait another 15 years, when Roberto Gini quite by coincidence asked me to play in his Concerto delle Viole and it became clear to me that this was the moment.
The Pavanas are the essence of this recording, although the faster dances share the incredible density and disturbing unpredictability with the former. They are presented here in strict chronological order of publication and thus of composition, one must assume.
Book by book we see a spiritual development which could speculatively be described as a sort of unconscious “Gradus ad Parnassum”, or maybe “Gradus ad Infernum”, or simply as a process of finding the “truth beyond the horizon” by re-inventing the ideal form of the pavana time after time, each time the same but each time profounder, much in the way of Bruckner’s symphonies.
Farina possessed the genius to compress and express the human experiences of a life-time in a mere two years……. 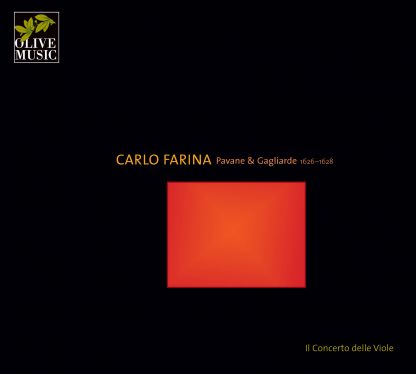