This most original programme comes from Mario Martinoli. The title of his disc, ‘The Well-Tempered Scarlatti’, has nothing to do with the temperament of his harpsichord, but refers to the way he became acquainted with Scarlatti’s sonatas. “The first Scarlatti I ever encountered was Wendy Carlos’ synthesizer orchestration of a number of Scarlatti sonatas. (…) I was 8 years old in 1973 and not yet playing any instrument, when I literally fell in love with Carlos’ album The Well Tempered Synthesizer, a stunning 45-minute LP including visionary elaborations of Monteverdi, Handel, Bach and Scarlatti masterpieces. Pure magic. I owe a lot to this recording”. When he was suggested to record a programme of Scarlatti sonatas he had to find a way how to choose from Scarlatti’s large output. He noticed that Scarlatti wrote sonatas in 21 of the 24 keys; only the keys of C sharp major, A flat minor and E flat minor had been avoided. The connection to Bach’s Well-Tempered Clavier was obvious. “Although it is manifest in catalogues of the repertoire, it certainly is not in the concert hall. Thus it seemed that a Well-Tempered Clavier approach applied to Scarlatti sonatas could be a good idea for a concert programme”. That is the second explanation for the disc’s title. Why Martinoli only recorded 20 sonatas instead of 21 is a mystery to me. You will have noticed that there is no sonata in the key of A flat major. Scarlatti’s oeuvre includes two sonatas in that key, K 127 and 130, and there was certainly enough space left on the disc.

Whereas there are not that many sonatas in the “most bizarre keys” to choose from, it is much harder to make a choice from the sonatas in the most common keys, such as C or D major. Moreover, Martinoli had to deal with the fact that many sonatas are conceived as a pair, as indicated by the way Ralph Kirkpatrick catalogued them. He decided to put aside this aspect: “[The] approach adopted in the CD program does not respect Scarlatti’s original indications but instead includes individual sonatas from the entire range of compositions, regardless of their companion”. Whatever one may think about this, the result is a recital which includes mostly rarely-heard sonatas and shows the wide range of affects Scarlatti expressed in his keyboard music. Martinoli plays the copy of a Pascal Taskin harpsichord of 1769. This choice can be defended by the fact that the court of Queen Maria Barbara of Spain for whom Scarlatti wrote most of his sonatas, owned a variety of keyboard instruments, including French harpsichords. I like the rather mellow sound of the instrument which is different from the more penetrating sound of Italian-type harpsichords or even other French instruments. It is probably partly due to the recording; the miking is not too close. Martinoli’s tempi are mostly on the moderate side, but generally convincing. Only in the Sonata in g minor (K 426) I found it a bit too slow considering that the indication is andante. It is a really beautiful piece which includes various pauses, but because of the slowish tempo these seem a little too long. The Sonata in c sharp minor (K 246) receives an outstanding, speech-like interpretation and the Sonata in b minor (K 87) which comes without a tempo indication is rightly taken at a moderate pace. The dark streaks in the Sonata in F (K 554) come across very well.

All in all, this is a highly compelling recital which includes various sonatas even Scarlatti aficionados may not have in their collection.
Jan van Veen 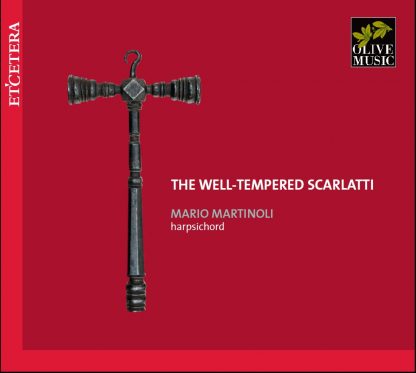