The Codex Squarcialupi, which owes its name to one of its first owners, the organist of the cathedral of Florence Antonio Squarcialupi (1416-1480), is one of the most unique and avangardistic music compilations throughout the Middle Ages. And not only for its content, consisting only of pieces of a profane character (226 ballads, 115 madrigals and 12 cacce) or the exceptional quality of its illuminations, but, and mainly, by its internal structure, structured chronologically around the fourteen composers active on a permanent or intermittent basis in Florence during the fourteenth century and whose portraits appear at the beginning of each section. This particularity undoubtedly reveals a new perception of the individual as an artist, much closer to the sensitivities of the renaissance than the middle ages .
Although it is not easy to choose between so many works, the fact is that the members of Tetraktys offer us a coherent program, of an overflowing beauty and, above all, representative of the evolution and development of Ars Nova in Tuscany. Thus, from the piece that opens the album, the famous madrigal by Giovanni da Cascia O tu cara sciença mie musica , probably the most ancient of all that the manuscript contains, to any of the ballads and madrigals of Bartholino da Padova and Andreas da Florentia, the four members of Tetraktys, fully engaged in a repertoire that they know to perfection, display a wide variety of stylistic, musicological and aesthetic resources allowing a performance rich in nuances and contrasts (the organological variety deployed between one composition and another is truly admirable). This disc seems to us admirable from all points of view. A new success, then, for Jill Feldman and Kees Boeke in their new career in Olive Music. 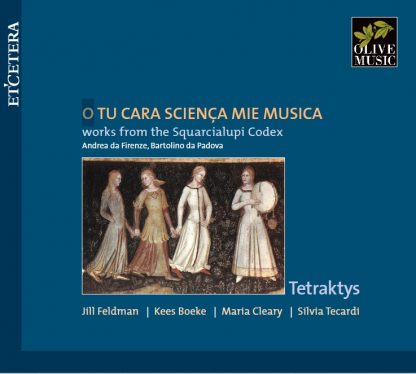