The human soul is so eager for novelty, noble listeners, that, tired sometimes of the perpetuation even of favorable situations, it wants to pursue improvement by alternating with a little suffering. So, in song and music, we love melodies less which are performed with a stable and permanent harmony of voices, whereas music is much nicer if it is made up of consonants and dissonants, and if the strong harmony of the voices is repeatedly weakened and broken by sounds that clash sharply with one another.

In the decades around 1600 the sparks flew not only in discussions on unknown celestial bodies (to which also Galileo Galilei contributed, for example with his Discorso delle Comete) but also in discussions about the development of music. Avant-garde composers tried to get rid of the rules of counterpoint of vocal polyphony and experimented with a freer use of the rules of dissonance, of time and dynamics. While the musicians and scholars in the field of the flourishing opera propagated the monodic style, in which the communication of text and expression was displayed as the main focus of the composition, instrumental music also sought a more immediate emotional expression. It enjoyed playing with strong contrasts and surprising effects and invented independent forms like the instrumental Canzona or the Sonata which developed from it. Dario Castello offers in his Sonate concertate in stil moderno some of the most unusual examples.

The existing vocal works were in many ways the starting point of instrumental music. Originally a French polyphonic chanson served as a model for the instrumental canzona. Praetorius, in his treatise Syntagma Musicum, defines the emergence of this genre as an instrumental polyphonic fugal work. Thus, the canzona tends to be subject to stricter standards than, for example, the new arias or toccatas – and it is all the more fascinating, in comparing the songs of Giovanni Picchi, Giovanni Martino Cesare, Bartolomeo de Selma, Giovanni Girolamo Kapsberger and the Sonata by Dario Castello, to identify all their characteristic flavors.
The practice of diminution is also based on a vocal model. The songs, motets and madrigals used, typically composed a couple of generations before, serve here as a basic grid for virtuosic ornamentation.
Francesco Rognoni, whose father was already known as the author of a diminution manual, is heir to a centuries-old tradition of the art of diminution that was certainly already in full bloom when Silvestro Ganassi published his work entitled Fontegara in 1535.
The ability to embellish “con arte e maestria”- “with art and skill” as required by Rognoni is an essential part of being a musician and the music itself. In his diminution treatise Selva de varii passaggi (1620), conceived as a study work, Rognoni allows us a broad overview of this art. He gives detailed instructions for the execution of embellishments such as Trilli, Groppi etc. and discusses idiomatic ways of interpretation such as “portar la voce, il lireggiare” (to slur groups of notes) for stringed instruments, and various articulations for the cornetto. Information concerning practical rules such as strict adherence to a regular pulse-tactus requested by him, enable, apart from their direct application, conclusions about the speed of execution which sometimes had to differ significantly from that of the underlying vocal works.

It is therefore evident that, in this case, the expression of the text of the original madrigal is no longer binding, but that the instrumental joy becomes an independent ingredient. The tempo and movement of the diminution should indeed operate within the structure of a stable pulse, but in its exuberance it ultimately becomes a musical end in itself and the carrier of expression.
Girolamo Frescobaldi however describes in his book Il Primo libro Toccate e Partite d’Intavolatura di Cimbalo (1615) a new approach to the flow of music for some forms like the Toccata in contrast to the strict measure of the diminished vocal works: “to play this type (of composition) it should not be subject to the battuta, as one does with the modern madrigal […] following the emotion or sense of the words, sometimes languid, sometimes fast […].”
North of the Alps a metamorphosis of the art of free ornamentation is eventually shown, (although delayed by the confusion of the Thirty Years War), in a particularly interesting way in the music of Philipp Friedrich Böddecker which is musically innovative because of the integration of ornamentation into the composition, and therefore into the notation.
One of the most influential and enigmatic figures of the changed musical climate in the 2nd half of the 17th century, however, was Alessandro Stradella. The Sonata XI is remarkable for its almost bizarre harmonic twists and turns, while its melodic lines capriciously defy all conventions of lyricism. At the same time, it shows a marked propensity for contrapuntal imitation that testifies to the polyphonic roots certainly still felt by Stradella.

In the vast and multifaceted span of time from Ganassi’s diminutions on Renaissance vocal compositions to the unclassifiable works of Stradella on the threshold of the late Baroque period, this program vacillates between extremes that are nevertheless held together by the common reference point of polyphonic tradition. The enormous variety arises in the different revolutionary handling of this tradition through the iconoclastic tendencies of the diminution practice and the new style of composition linked to “affetti”. The era from the beginning of the 17th century until the 1680’s, opened up a vast field of experimentation, no longer limited entirely by the previous rules of Renaissance polyphony and not yet subject to those of the late Baroque.
For listeners today, however, the eloquent expression of this music and its mutually soaring voices may primarily appear as a truly celestial discourse. 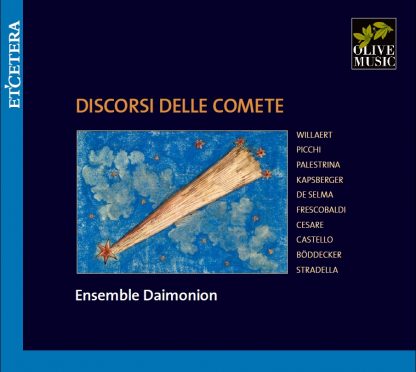