The Chantilly codex is the most sumptuous of the manuscripts transmitting the fascinating polyphonic songs of late fourteenth-century France in a style known as the “ars subtilior,” the “more subtle art.” In the songs of this period, composers exerted themselves to express ever more complex rhythms, inventing new notational symbols to express them. The expression of musical rhythm through notation was such a hot-button issue that a number of songs in the manuscript actually take it on as a topic, becoming self-referential essays about musical composition. In addition, the composers of this music worked in the great courts of Europe, and politics and political events invariably made their way into the song repertory.

The music of this codex (which only surfaced in the later nineteenth century in the hands of a Florentine bookseller) was largely unknown to scholars until 1950, when the first modern edition appeared edited by Willi Apel. Apel’s colleague at Yale University, Paul Hindemith, wrote the preface to this edition, and his acute assessment of these “miraculous microcosms of sound,” as he put it, still has resonance today. He praised the composers for “their distribution
of tonal weight, their cantilever technique of spanning breathtakingly long passages between tonal pillars. . .their unselfish and uninhibited way of addressing the audience and satisfying the performer; the perfect adequacy of poetic and musical form; [and] the admirable balance of a composition’s technical effort and its sensual appeal.” All of these attributes, and more, are to be heard in the repertory presented on this disc.

The oldest composer to be represented in the Chantilly manuscript is the great Guillaume de Machaut (d. 1377) whose 100 or so songs are preserved in complete-works manuscripts copied under his supervision. Of those songs, only a handful appear in other manuscripts of the period, and the ballade De petit po is one of these, appearing in ten musical manuscripts and four poetry manuscripts copied mostly in Italy. The text is in the voice of a woman, lamenting the fact that her lover has listened to gossip about her and no longer loves her as a result. The theme of the harm that gossip can do to lovers is a common one in the courtly love tradition that goes back to the troubadours, and it is one that Machaut drew upon often in both his songs and his narrative poetry. This ballade, like many in the period, quotes proverbs in both its opening line (De petit po de niente volonte) and its striking refrain: “he never loved who for so little hated.” An educated listener in Machaut’s period would thus be treated to the pleasure of recognizing the quoted proverbs and relishing their use in a new context.

Two other composers who probably came from an earlier generation than many in the Chantilly manuscript are Johannes Vaillant and Grimace. Vaillant is mentioned in a treatise on poetic theory as a poet and singing master in Paris, and a music theory treatise states that he taught proportions using the ballade Le sault perilleux, also found in the Chantilly manuscript. Vaillant’s rondeau in the form of amorous dialogue, Dame doucement/Doulz amis, is notated using a juxtaposition of sections in red and black ink, which causes a perceptible shift in the meter from a modern 3/2 to 3/4. The song is very uncharacteristically given a date of 1369 in the manuscript; if that date is reliable it makes this song among the manuscript’s oldest after those of Machaut. The other dialogue song recorded here, Se Zephirus/Se Jupiter by Grimace, employs the common topos of invoking names of Greek mythological characters in a conditional construction (“If Zephirus. . .”) that ends with the familiar lover’s complaint that his lady will not let him see her. Finally, Phiton, Phiton by the unknown Magister Franciscus quotes text and music of a ballade by Machaut, Phiton le mervilleus serpent, but refashions the text so that the “very poisonous “ python is the enemy of Phebus, the common nickname for Gaston Fébus, Count of Foix (1331-91), who was the dedicatee of a number of songs found in the Chantilly manuscript.

Phiton, phiton is one of a number of songs in the Chantilly manuscript that refer directly to real world events in the lives of the courtly patrons of its composers. The beautiful lament on the death of Eleanor of Aragon, Queen of Castile, in 1382, by Jacob de Senleches gives us one of only a few clues to the life of this most interesting composer. That he was a harpist is known from a single archival notice that names him as a harpist in the employ of Cardinal Pedro de Luna, who later would play a major role in the bizarre church politics of the day as the Avignon Antipope Benedict XIII. Senleches’s identity as a harpist is confirmed by the survival of an extraordinary song, “La harpe de mellodie,” in the shape of a harp whose strings serve as the staves (this song also appears in the Chantilly manuscript, in regular staff notation).

The enigmatic Solage (whose name may be either a pseudonym meaning “solace” or indicate that he hails from one of the myriad villages called Soulages in the Auvergne) is the best represented composer in the Chantilly manuscript, with 10 songs ascribed to him. Even though we are not sure of his name, references in his surviving music suggest that he was patronized by the great bibliophile and connoisseur of music, Jean, Duke of Berry. His ballade S’aincy estoit (recorded by Tetraktys in its first volume of Chantilly songs) is an extended praise of the Duke, who is named explicitly in its second line (“the good and kind Jean, Duke of Berry”) and its refrain pronounces him the “flower of the world.” The two songs recorded in the present volume, the ballade En l’amoreux vergier and the virelai Tres gentil cuer, have also been linked to the Duke. En l’amoureux vergier seems to have been composed along with two other songs in the Chantilly manuscript for the Duke’s wedding in 1389 to Jeanne of Bolougne. Tres gentil cuer ends with the same text as the refrain of S’aincy estoit, “the flower of the world,” suggesting that it too was written for the Duke of Berry.

The exciting and fractious world of musical composition is invoked in two songs recorded here. In the first one, the anonymous Tout clarté, the reference is subtle: the poetic speaker describes a world of reversals in which everything clear is obscure and all joy is sadness. This because he is unable to see “the figure,” meaning both the lady whom he loves but also the written note shapes that the composer uses to write his music down. The reversal of the world described by the speaker is reflected in the striking reversal of voice parts in the opening phrase of the song, in which the cantus, the highest voice, descends through a long passage to close an octave below its opening note, while the tenor ascends to cadence above it. Finally, the exceptionally clever Or voit tout en aventure by a composer named only as Guido, to whom only one other song is attributed, decries the state of music in his time: everything has gone to hell because composers are constrained to use the new notational symbols (‘figures” again) that no one likes and that “have no measure,” or make no sense. The delightful irony of this song, an irony that is available only to listeners who can also look at the manuscript, is that the song is written using the very note shapes that its text complains about. The Chantilly manuscript is indeed a document that must be prized both for the sonic beauty of its songs and the visual beauty of their written presentation, making it one of the first multimedia objects of western European history. 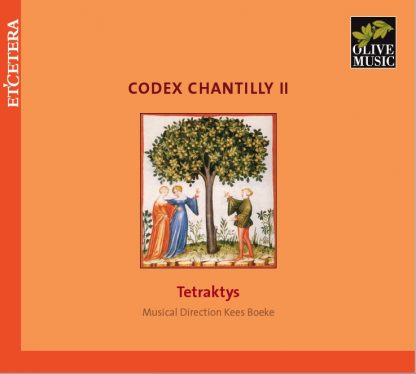