The  instrumentalists of the Concerto delle Viole and singer Jill Feldman have granted us a real treat, especially suited to heal the deepest spiritual wounds: Consort Songs by William Byrd and His Contemporaries, a journey through English music  between the sixteenth and seventeenth centuries, organized around the imposing author of huge masses, as this recording shows, also of beautiful songs on various subjects. Someone has written that, after Shakespeare, Byrd is most imposing figure in the British Renaissance. However, he appears here alongside some distinguished contemporaries, names that constituted one of the brightest musical constellations of the day: John Ward, William Wigthorpe, John Bennett, Richard Nicholson and, perhaps more famous today, Alfonso Ferrabosco  and Orlando Gibbons, among others.
The genre of the Consort Songs is a distinctively English contribution to the history of Renaissance music, consisting of an air for solo voice with accompaniment of three, four or five viols. Its origins can be sought in a long tradition of compositions for instrumental ensembles, especially many airs for the lute whose star composer was John Dowland. The famous In Nomine by John Taverner was in its infancy  a Benedictus cantus firmus drawn from his Mass Gloria tibi Trinitas, which then  became an autonomous instrumental piece known in multiple versions. Some of the most inspired were in fact composed by Byrd, and in this album we have a few unbeatable examples , such as Sermone Blando, Miserere, Christe Redemptor or Christe qui Lux, or by Gibbons (listen to that ear-caressing In Nomine a 4) miracles of subtlety and smoothness in the interpretation of Concerto delle Viole, whispered directly into the heart of the listener. But not all consort songs display  a so markedly religious atmosphere: there’s the anonymous ballad that starts this program, the very spirited When Daphne from fair Phoebus did fly, or the delicate lullaby of Bennett, Venus’birds, both linked to sumptuous mythological atmospheres , and both presented with seductive expressivity by soprano Jill Feldman .
Thomas Morley, a pupil of Byrd, well defined the genre of the fantasie, stating that ‘they develop without precise goal, subject to the whim of the moment, turned and twisted as it seems convenient and may last more or less as deemed appropriate.” So enjoy these whimsical twists of the Renaissance imagination, a real soothing balm for the soul and body.
Javier Palacio 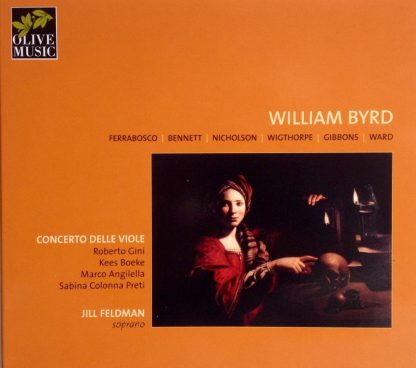