The “Trecento” was a century of major musical experimentation moving between two poles:
Guillaume de Machault with his successors in the French Ars Subtilior tradition, and the group of “Tuscan” composers that determined the musical situation in Italy. The overall spirit of avant-garde that permeated the century, and that was characteristic both of the French repertoire and the Italian, stands in contrast with the unconditional acceptance of the traditional formes fixes that dominated the poetical forms of the period. Only in the sonata-form of the 18th and 19th century do we find a similar fidelity to a particular musical form.

The madrigal, with its simple structure AAB, is narrative, moralistic, satirical, mythological, heraldic or pastoral in content – a perfect image of the new renaissance mentality and often strikingly modern (as we would say today).

In the course of the century, the madrigal was, little by little, replaced by the ballata, which in its subject matter treats almost exclusively the problems of amorous relationships – the general topos of the whole of French secular repertoire. The more elaborate form A1B1B2A2A1, is identical with that of the French virelai, with which it also shares the possibility of linking various strophes in the form of ABBAABBAABBAA etc. The ballade in France, however, uses the simple form A1A2BC, in which the C represents a refrain, that is identical for all (usually 3) strophes.

The rondeau, that, in its turn, slowly replaced the ballade in the later half of the century and the next, has the most complicated structure of all the formes fixes: A1B1A2A1A3B2A1B2. Although, stylistically speaking, the origins of the basic musical concepts in the two countries are extremely different, the period is nonetheless characterized by a great mutual interest in, and subsequent integration of the most variegated ingredients by both.

All this is not surprising. The trecento is dominated by two major poets: Guillaume de Machault (c.1300-1377) and his almost exact contemporary Francesco Petrarca (1304-1374). Tuscan by birth, spending most of his life travelling between Avignon and northern Italy, he served as a live contact between two cultures.

The earlier Italian style is represented in a madrigal by Jacopo da Bologna, and in an instrumental ballata by Gherardello da Firenze. Three decidedly later ballate are by Andreas “horghanista” da Firenze. The latter, a very original composer, had a direct influence on the last important voice of the trecento, who was also the first of the “northerners” that would define musical life in Italy in the future: Johannes Ciconia.

Guillaume de Machault is practically the only French or foreign composer represented in Italian manuscripts of the 14th and beginning of the 15th century.This fact alone is proof of the esteem in which he was held, until well after his death, and of the influence he had , directly or indirectly on “stilnovisti” like Landini or Andrea da Firenze.

However, Machault’s true heir was Matteo da Perugia, who combined the harmonic-rhythmic audacities of his great model with the melodic gift of Landini, thereby creating a style so particular that it had no influence on the course that musical history would take. The textual references to Machault are manifold and certainly not a coincidence (“dame d’onour”, “de toutes flours la precieuse fleur”, “de corps et de cuer vray” etc.)

Johannes Ciconia , on the other hand, was the composer who showed the way to the renaissance: his much simpler style, text-depicting melodies and general sense of consonance , especially in his secular works, were apparently as appealing then as they are now. 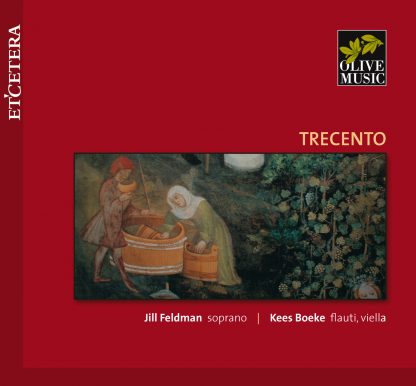