Ever since the interest Schoenberg and Webern showed in Baroque and Renaissance music, there has historically been quite a bit of overlap between the early music and contemporary music scenes. Players move from one to the other, and compositional experiments have set the goal of linking the two. Yet what recorder player Kees Boeke attempts here — contemporary compositions that are rooted in Baroque structures and serve as virtuoso vehicles for a player/composer — remains quite unusual. This disc can’t quite be called fun, but it offers interesting listening for anyone who’s ever picked up a recorder and fooled with the various sounds that can come out of it. It makes musical sense for a couple of reasons. One is that early music is full of abstract procedures, and these help prepare the ear for the formalism of contemporary composition. Boeke’s 4 in 3 in 2 in 1 (the notes clearly explain what all the numbers are about) may sound a bit procedural, but it’s based on a Henry Purcell work called Three in One Upon a Ground and features a ground-like structure. The other three works likewise have models from various early eras of the Western tradition. Yet the music is in no way neo-Classical. The models are used in abstract ways, not as the basis for what one hip-hop writer called “stapling.”

The second factor helping the average listener along is that the use of extended techniques is undeniably intriguing in the case of the recorder. For all their emphasis on formal ideas, these are virtuoso pieces. A duo with Boeke himself is heard on two pieces, one of them featuring soprano Jill Feldman, while the all-female Trio O’Henry plays on the other two. In all cases, unusual things are done with the recorders. Their tones are voiced; the instrument is pushed to extremes of range; the Trio O’Henry uses tonguing to produce fascinating percussion effects. A disc of contemporary compositions for recorder isn’t for everybody, it’s true, but sample this one if you come to it from either early music or contemporary music, or if you just happen to run across it. 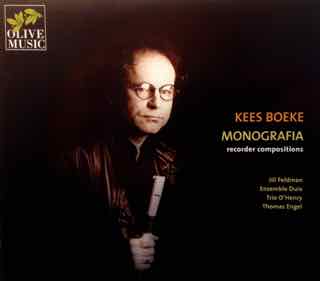