Gesti antichi e moderni is a program built around the idea of ​​extreme polyphony, of complex counterpoint, of independence of musical gestures; Italian and English instrumental works of the Renaissance and a composition of the twentieth century, united by a spirit of great experimentation and research.

The One hundred and twenty-five counterpoints on the tenor La Spagna by Costanzo Festa represent one of the pinnacles of the art of composing on a cantus firmus in the Renaissance; in this monumental collection, Festa reveals his great mastery of counterpoint using the most different artifices. It is a kind of Art of Fugue composed two centuries before Bach’s monumental effort.

Similarly, in England between the 16th and 17th centuries, composers such as John Baldwine, John Lloyd or Robert Fayrfax created compositions with a very high degree of rhythmic complexity, a complexity comparable only to that of the so-called Ars Subtilior of the late ‘300 or of a certain repertoire of XX and XXI century.

In the same years around 1530, in which Costanzo Festa composed the Counterpoints, the English king Henry VIII compiles a book of compositions favored at his court, including about thirty by his own hand, both vocal and instrumental. As can be seen from the king’s inventory of 1547, he possessed more than 50 recorders of all sizes and therefore we can conclude that the recorder consort was one his favorite vehicles for his music. 1535 was also the year in which Sylvestro Ganassi published La Fontegara, perhaps the most important treatise for the recorder ever written. “The export” of Italian recorder musicians and builders such as the Bassano family to England during the sixteenth century ensured a enduring presence of the recorder there around 1600, when Baldwine composed his “neo-subtilior” works. The fresco of the recorder quartet by Girolamo Romanino in the Castello del Buonconsiglio in Trento about 1535 is further confirmation of the “natural” presence of this type of ensemble in the musical world of the time.

In 1966 Luciano Berio composed Gesti for the Dutch flautist Frans Brüggen , a work that would have had an enormous influence on the modern history of the recorder; here the flute technique is deconstructed: air, fingers, tongue, even the performer’s voice, then the various musical gestures, are notated independently of each other, in a sort of extreme polyphony for solo instrument. 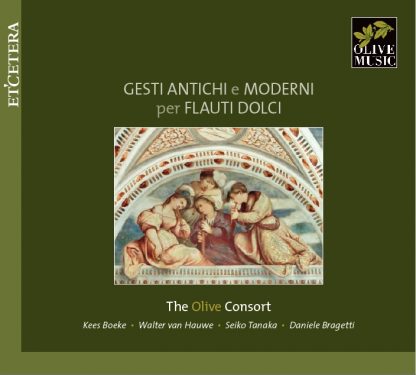