by Uncle Dave Lewis
Pianger di dolcezza is one of the finest ever collections of Italian Seicento monodic song, featuring the formidable talents of soprano Jill Feldman as backed by chitarrone player Karl-Ernst “Charlie” Schröder and harper Mara Galassi. This disc, recorded in 2001, was originally released in 2002 on the Italian Stradivarius label; it was re-released in 2009 by Olive Music in partnership with the Dutch label Etcetera in tribute to Schröder, who died less than a year after the original release. Its reappearance is reason to rejoice, as the original issue of Pianger di dolcezza was hardly noticed; only one university library in the entire United States acquired a copy for its circulating collection. This program combines some of the strongest vocal literature of Giulio Caccini and Sigismondo d’India; both pretty well represented on disc, but are seldom recorded together despite their temporal and stylistic continuity. To bridge and to vary the songs, Schröder and Galassi play a number of instrumental pieces by Kapsberger, Castaldi, Trabaci, and Quagliati; these are all expertly played and provided a showcase for the dexterous Schröder, particularly in the CastaldiCapriccio detto Chiacchierino and Kapsberger’s Toccata Settima from his Fourth Tablature book. The program is divided into seven divisions of material; the third division pulls together some of the most hair-raising songs of Caccini — “Bella rose porporine” — andd’India, “Ma che? Squallido e oscura,” “Amico, hai vinto,” and two others assembled into a sort of a medley. Continuity is the key of this program; the whole album flows and seamlessly blends together. They save the big event for near last, d’India’s Lamento d’Olimpia where Feldman brings out her arsenal of dramatic vocal effects, breathing life into the often arcane and obscure texts on which Caccini and d’India hung their notes, in the last-named case the words being d’India’s own.

Many lengthy recitals of monodic song utilize the strategy of alternating vocal pieces with instrumental ones in hopes that the program doesn’t sag somewhere along the way, yet relatively few succeed in such strategy. Pianger di dolcezza certainly does make the cut; it’s compelling listening all the way through, beautifully recorded, and Schröder and Galassi’s instruments colorfully coalesce, weaving a crystalline course underneath Feldman’s soaring, but sensitive, voice. Olive Music’s Pianger di dolcezza is a release to treasure and a fitting tribute to Schröder’s memory and instrumental legacy.

Olive Music, Kees Boeke’s and Jill Feldman’s label , has merged with the company Et’cetera, which now re-released an album recorded in 2001 offered as a tribute In Memoriam (somewhat belated, of course) to the German lutenist Karl-Ernst Schroeder (Charlie in the environments of early music), who died in 2003 at 45 years of age. Schroeder and harpist Mara Galassi accompany Feldman here in a series of pieces by Giulio Caccini and Sigismondo D’India, written on texts by some of the most popular poets in the early seventeenth century (Petrarch, Tasso, Guarini, Rinuccini,Chiabrera). Preludes, Toccatas and Capriccios of composers Kapsberger, Castaldi, Quagliati and Trabaci complete the CD.
The American soprano, who at the time of this recording was approaching 50, still possesses the shining timbre and extraordinary intensity that fans will remember well of her first collaborations with William Christie in the early 80’s, but now her style has become more refined, the song flows more composed , the prosody is more careful, both in pronunciation and marking of the rhythmic profiles of each work, and she confirms her mastery of ornamentation of that time , allowing her to penetrate with absolute fidelity and deep expressiveness the stylistic sense of each of these delicate accompanied monodies, enhanced by Schroeder’s and Galassi’s nuanced and subtle, warm and elegantly ringing sounds. A delightful album, full of melancholy, because of the content of most of the songs and the good memory of Charlie: just over an hour of intensely and disturbingly beautiful music, yet caressing and restorative. 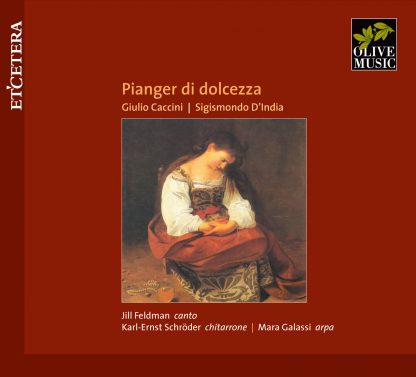