John Jenkins and his “most esteemed Friend” William Lawes

The expression Fantasy-Suite was adopted in modern times to define a genre typical of seventeenth-century English instrumental music, to which the contemporaries did not feel the need to give a name. We, however, designate by that term a model that had its origin in the 24 Fantasy-Suites by Giovanni Coprario (as John Cooper or Cowper, ca. 1575 – 1626, called himself, italianising his name). Scored for violin, or two violins, and viola da gamba “to the organ” (a prescribed organ part and not reduced to the basso continuo line), these compositions are typically divided into three movements: Fantasia – Almain – Galliard. Coprario conceived the Fantasy-Suite for his viola da gamba student, the Prince of Wales and future King Charles I of England (1600 – 1649), in which he performed the viol part. It was in this context that the latter met William Lawes (1602 – 1645), two years younger and also a student of Coprario, a meeting that was the beginning of an intense friendship. The future King often went to Hertford, where William lived, with Count Edward Seymour who was a patron of both the teacher and the student, and with whom Coprario was customary to play in consort. Coprario became composer-in-ordinary to the Court in 1625.  His formal model was adopted and developed by William Lawes and John Jenkins (1592 – 1678) during the era of the reign of Charles I; subsequently by John Hingeston (ca 1610 – 1683) in the period of Oliver Cromwell’s Commonwealth of England and again by Jenkins and Christopher Gibbons (1615-1676) after the Restoration of 1660. Lawes paid a tribute of gratitude to his teacher in the beautiful Paven of Coprario (for harp, violin, viola da gamba and theorbo) but especially in the 16 Fantasy-Suites that have reached us in manuscript.

The violin is prescribed in the manuscripts of Coprario and Lawes; in those of Jenkins, instead, the upper part is often indicated by the generic term Treble. However, if on one hand Jenkins’ music may have been conceived in an environment where the descant viol was still played (mainly in viol consorts ), on the other hand the style of writing and coherence with the compositions of his contemporaries and friends like Lawes, let us imagine that also in Jenkins’ Fantasy-Suites it was the violin to dialogue with the bass viol (or Division-Viol), substituting the Treble Viol. Both Lawes and Jenkins, like Coprario himself, wrote various compositions for two viols and organ or thorough bass, a formation that had much success also with continental composers of the seventeenth century. The peculiarity of the two viols with the two violins gives these Fantasia-Suites a particularly beautiful and interesting sonority. The viols in combination with the two upper instruments, participate sometimes in the polyphonic fabric of the score, sometimes in the virtuosic passage work which is found, likewise, in compositions for two solo viols and organ (Ayre and Divisions or Fantasias).

John Jenkins and his “most esteemed Friend” William Lawes

It is difficult to assign a date to the works of the long-lived John Jenkins. His biography (Maidstone, 1592 – Kimberley, 27 October 1678) spreads over three different historical periods (the reign of Charles I, the Interregnum from 1649 and the Restoration from 1660) and saw very great social, political and musical changes. The year of his birth is deduced from the epigraph on his grave, and little is known of his early life. He grew up with the art of William Byrd, Orlando Gibbons and their contemporaries. He died when the art of Henry Purcell began to appear and whose Fantasies (1685) would represent the last great monument of the glorious musical heritage which Jenkins himself had contributed so much to. He was considered a virtuoso of the Lyra Viol: King Charles I of England said he performed “wonders on an inconsiderable instrument”.

At the outbreak of the Civil War (1642), he emigrated to the countryside, finding protection with two aristocratic families: the Derhams in West Dereham and the Harmon L’Estranges in Hunstanton. The members of the two families were friends and active supporters of the Royalist cause. Jenkins moved freely between the two families when the occasion demanded, and according to his pupil and biographer Roger North, he did not hold official posts in any aristocratic family: “I never heard that he articled with any gentleman where he resided, but accepted what they gave him”. More than 800 of his instrumental compositions survive. His genius shines through in these works characterized by unsurpassed and highly original lyrical inventiveness, and exceptional skill in their tonal organization. John Jenkins and his “most esteemed friend” William Lawes, can be considered the two most important composers of instrumental music during the reign of Charles I (1625-1649).

William Lawes was one of the most respected and beloved members of the Royal entourage and, along with Jenkins, undoubtedly the most important composer of the period of Charles’ reign. Although his name occupied a prestigious position in the history of English music, his music remained in the shadows for about three hundred years (John Jenkins’ compositions suffered the same fate). It was only in the early part of the twentieth century that many scholars and musicians rediscovered, and began to perform and revive the large amount of beautiful music by this true genius of the past, contained in countless hitherto unpublished manuscripts. In fact, there are more than 600 instrumental and vocal compositions of all genres by the hand of William Lawes. His first occupation at court – “For ye lutes and voices” – dates back to 1635, but we know that he was at the service of Charles I, even before the ascent to the throne of Charles, in 1625 as a member of a small group of musicians led by Coprario. Remember that Charles, when he was a boy, and Prince of Wales, had studied the viola da gamba with Coprario in the same period as William Lawes, two years his junior. They played together in consorts and it is probably on this occasion that their friendship and mutual admiration was born. During the civil war, Lawes, a true Royalist, joined the King at Oxford in 1642 when the latter moved his Court there, and became part of the Kings Life Guards. On September 23, 1642, he reached Chester, riding together with Charles and the troops in an attempt to rescue the garrison which was under siege. During the battle that took place the following day, he managed to reach the garrison, which seemed at that time victorious over the rebel forces. But when the retreating rebels turned unexpectedly and , reinforced by other troops who secretly joined from the side lines, charged their pursuers, Lawes “betrayed thereunto by His own adventurousness” (betrayed by his own audacity, in Fuller’s words) was hit and killed . The King, already mourning the death of his relative Bernard Stuart, who died in the same battle, instituted special commemorations for his musician friend, honouring him with the title of Father of Musick. During the Civil War poets and musicians of the time mourned his violent and premature death. Many poems were written and set to music in commemorations and laments by authors such as Robert Herrick, Aurelian Townshend, Robert Herath, John Jenkins, John Wilson, Simon Ives and John Hilton. William Lawes became a martyr to the Royalist cause and inscriptions such as this mourned his loss:

“When pestilential purity did raise

Rebellion ‘gainst the best of Princes

And Pious Confusion had untun’d the Land

When by the Fury of the Good old Cause

Will Lawes was slain by those whose Wills were Laws.”

During the Civil War (1642 – 1651) and the Commonwealth of Oliver Cromwell (1649 – 1660), court music was banned and musicians linked to the monarchy had to find work elsewhere. Some, like William Lawes, joined the Royalists or, conversely, the Roundhead (also known as Parliamentarians, supporters of Parliament against Charles I); others survived devoting themselves to teaching and again some found a job with the aristocratic families in the countryside. John Jenkins himself had to be a staunch Royalist and his feelings seem to be reflected in “Newark Siege”, a magnificent example of descriptive program music, which includes a central piece in the form of Pavan and Galliard, followed by an Air. They represent the clash of opposing armies, the lament for the dead and the celebration of victory after the siege of Newark, an event that ended with the surrender of the rebels to the troops of Charles I, on May 8, 1646. After the sudden death of Lawes, it was Jenkins, more than any other English composer, who supported and fuelled Consort Music during the Commonwealth period until the Restoration.

Towards the end of the 1650s we know of intermittent stays of the composer with Lord Dudley North, in Cambridgeshire, but he appears there as composer in residence from 1660 to 1667 approximately. The beginning of his permanence there also marked the arrival of the Restoration and the end of the Commonwealth, a historical fact that brought about great changes in the English musical taste caused by the influence of continental music imported by the new King Charles II on his return from the Versailles of Louis XIV. The musicians who survived the Commonwealth had returned to their employment at Court and new ones were hired to replace those who had died in the meantime. The new taste was manifest in the new appointments by Charles II, with the entry into service of 12 violinists. Jenkins was at that time 68 years old. Nevertheless he was hired as player of the theorbo in the group of “lutes, viols, and voices” and his name is among the court musicians until his death.

His pieces for two violins, two viols and organ are probably datable after the Restoration. With the change of fashion, the consort of viols gradually gives way to the taste for the Italian Trio-Sonata. It is to this stylistic change that these works presumably date back. In them, we hear the Italian instrumental model, which in the Trio-Sonata for two violins reached the apex of form and aesthetics that influenced musical Europe. In the dialogue between the four instruments, we hear echoes of the earlier violin music by Salomone Rossi, Biagio Marini and Carlo Farina. These compositions satisfy the rules of rhetorical eloquence, perfect constructions of an accomplished discourse, and splendid examples of the art of oration in music.

Roger North summarises Jenkins’ oeuvre and “career” , spread out over the long life of the composer, by stating that “he was an innovator in the days of Alphonso, Lupo, Coperario, Lawes, &c., who were musicians of fame under King Charles I, and superinduced a more airy sort of composition, wherein he had a fluent and happy fancy. And his way took the age he lived in, which was a great happiness to him, but he lived so long that he saw himself outrun and antiquated”. Jenkins is buried in St. Peter’s Church Kimberley, Norfolk. On his tomb is written:

“Under this Stone Rare Jenkins lie

The Master of the Musick Art

Whom from the Earth the God on High

Called up to Him to bear his part.

In anno seventy eight he went to Heaven.

In God We Trust.” 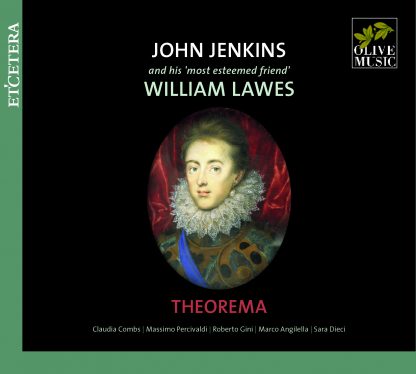